Yes, looking back 46 years I feel that those were the nostalgic days of my life. Just completed my BSc second year, I was desperate to get on with a profession. The choices were - Chemical Engineering in Kashmir or motion picture photography at the Film Institute or hotel management in Delhi. What they say is right, when he gives he gives with both hands, three choices. I was not confused at all, the choice was made, I had to take up the service industry as a profession and I have never regretted it. Remember, while you have your senior family members to advise you on your profession, their thinking will be biased on what they like or what dreams they could not pursue. Always listen to your own inner call, do what you like best because only then can you excel. I did the same.

So that was how it was meant to be. Those hutments in Pusa complex were going to be my temple for the next three years. I started liking everything about the institute. Those cement floored corridors, come to think of it; there was just one “L” shaped corridor opening into a huge lawn adorned with class rooms on the other side. There was a small laundry, bakery room, advanced training kitchen, basic training kitchen and a bulk cooking room. Yes we also had the canning and food preservation training rooms tucked in between. The student dining room was a very small yet cozy affair.

There was a lot of excitement before we actually started the first day. Getting our uniforms stitched - the chef’s coat or the cap, the restaurant service white jacket and so on. I will never forget my first day; it was an experience of a lifetime. The first class was in BTC.  For a person who was from a strict vegetarian family where even onions were banned, I had to straight away jump on to making stock, wash the bones and cook the stock. I remember that for a week the smell and feel of bones was lingering on my fingers. But I was determined to not only move ahead but to excel in all areas. The testaments were quick to come; I topped the first year’s half yearly tests. The same feat was repeated by me in the final exams.

The most enjoyable period was the first week when the fresher’s are alone; the seniors join a week later. I feel that all educational institutions should follow this system. It makes a fresher comfortable in a new environment which in turn helps to acclimatize them. The first week concludes with very friendly events between the faculty and the freshers. All freshers come in fancy dresses.  We all did enjoy this event. Except for the fact that I was in a totally new environment, the first year was smooth sailing for most of us.

We shifted to the new building in the second year. Mr. Simms, our Principal from the U.K., went back and very soon we had the opportunity to welcome Dr. Mitbunder, as the new OSD of the institute. The new building was a treat. Fresh, well planned, an open layout and spacious class rooms and labs. The housekeeping practicals added freshness to a brand new product.

One day, I think it was in the month of October, I had gone to the office of Dr. Mitbunder and that is when I interacted with him for the first time. I found him to be very friendly, yet a totally professional individual. I mentioned to him that it was high time for the Institute to have its logo and its importance in the establishment of the institute’s identity. Well, you know what, he smiled and said, “yes you have a point….Why don’t you design something and bring it to me, if we like it, we will reward you”, “Me? Designing the logo?? , I could give it a try definitely, but I am not a professional designer”, “I know” he said, “but you have a passion, or else you would have never thought of it”.

That had made my day. I embarked upon the task in all earnestness. Those days we did not have access to the Internet and the only way to research was to read books. I scanned the British library, found some relevant information on logo designing, visual communications and other related topics. At this point I would like to emphasize - If you have noticed postage stamps, you would know that a small piece of paper sometimes conveys a long story, even a century long story. Armed with these two tools, I sat down on a Saturday evening determined to finish my task of designing the logo. I had to depict the service aspect of the industry, the fact that our basic product is accommodation, food & beverage, we sell comfort and luxury and we do all this with an invisible managerial crown on our head. It practically took me over six hours to put all symbolic pieces of the logo in a logical and presentable sequence and then fit into a square shape. I then thought of a motto for those who will wear this as a crest on their blazers “Learn To Serve” and finally finished the logo.

Next day was Sunday, perhaps the longest of my life. I could hardly wait for the Monday morning when I would proudly present this piece of creative art that I had designed. I could finally meet Dr. Mitbunder at around 11.30. Smiling, I handed over the covered logo design to him. He took a few minutes to study and inspect my work and those few minutes seemed like years to me. In between he would raise his eyebrows and smile.  After about five minutes of studying the logo minutely, he placed it in front of him and asked me to explain the total concept. He listened patiently nodding here and there while I took my time to explain the details of my work. When I finished, he stood up, shook my hands and said “Ram, I like the logo and the concept very much, you have symbolized all aspects of this profession beautifully”. If I remember correctly, it took the institute almost a week to make a formal announcement on the adoption of the logo. So my creation became the official logo insignia of IHMC&N, Pusa. That was the proudest day for me.

The Logo concept as conceived by me in 1967

The days at the institute were full of highs and lows but all in all they were the most enjoyable days. The faculty was very helpful and understanding, we had small classes and by the time we reached the final year, we were just under 20 students. In the third year, I had my first brush with real politics. I was elected as the General Secretary of the Students Association. We organized a very successful Fete and an extremely successful cultural evening to mark the opening of Institute’s auditoriums. While doing all this I never lost sight of my goal - to excel in my academics. Well if you work towards your goals with determination, focus and a positive attitude, nothing is impossible. They were fun filled and hardworking days and before I could realize, our student life at the institute came to an end. I topped the lists in the finals and my name adorned the toppers list in the institute as an inspiration for the new generation of students joining the hospitality industry. As for me, I stepped out of the institute and took on my first job at the India Tourism Development Corporation, well equipped with the skills and knowledge that I acquired in this very esteemed institute – my alma mater.

Today, after four decades, when I look back I am surprised at the distance I have travelled but when I look ahead….there are miles to go.

This article was written for publication in the official souvenir released on the Golden Jubilee Celebrations of the Institute of Hotel Management, Catering & Nutrition, Pusa, New Delhi, India held on 14th September, 2012.

Ram Gupta is a professional hotelier with over four decades of experience in India, Far East, Middle East and Europe. He has completed his hotel management studies from The Institute of Hotel Management Catering & Nutrition, Pusa, New Delhi and has done higher studies from Germany. A Member of Institute of Hospitality, U.K., he is also a Certified Hotel Administrator from U.S.A. He has worked for some of the best hotel chains and was associated with over two dozen hotel projects in varying capacities. He has served on a number of trade bodies and boards of various companies. He is now an independent consultant in the Industry. His web site can be viewed at www.bcgglobal.com and can be contacted at ramgupta@bcgglobal.com 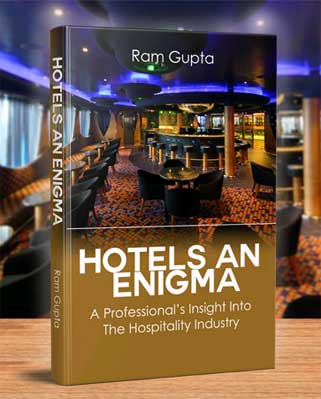